The ADHD - What Now Blog

Reducing stress, growing skills, and building responsive relationships so that your family with neurodiverse kids can thrive.

What is SPD (Sensory Processing Disorder)?

I was pacing my bedroom floor; my phone pressed to my ear, trying to hear over preschoolers playing in the next room.

The school special ed coordinator was on the phone, telling me about the process for early intervention.

At that moment, several years ago, confusion and disappointment would be the two words that described my thoughts and feelings most.

Confusion because I wanted support for my kiddo, and I was uncertain how to get it.

Disappointment because I had been taking the child to sensory-based physical therapy for a while, but I still couldn't wrap my head around sensory processing.

It took a few years for me to get how sensory processing impacted our everyday lives.

Understanding sensory processing sooner could have saved us battles over digging holes in the yard to make it look like swiss cheese or doing headstands instead of homework.

How about you?
What areas of frustration could have a sensory processing component?
Could it be daredevil behavior, constant noise creation, attention challenges, or difficulty following directions?

After all, studies suggest that up to 40% of children who have ADHD also have SPD.

And sometimes, an attention challenge is driven by sensory processing, not true ADHD.

One of my favorite resources for sensory processing is  The Out-of-Sync Child by Carol Kranowitz.   The book has over 1 million copies sold, and the third edition of the book will be released on April 19th.

Carol does such a beautiful job of making sensory processing clear.

And now I get to share her skills with you. :)

In this interview with Carol, she describes how:

To see how sensory processing shows up, check out the interview

With help in this area, life gets easier.

Cheering you on - each step you take.

P.S.  Studies suggest up to 40% of kids with ADHD also have sensory processing differences (SPD). 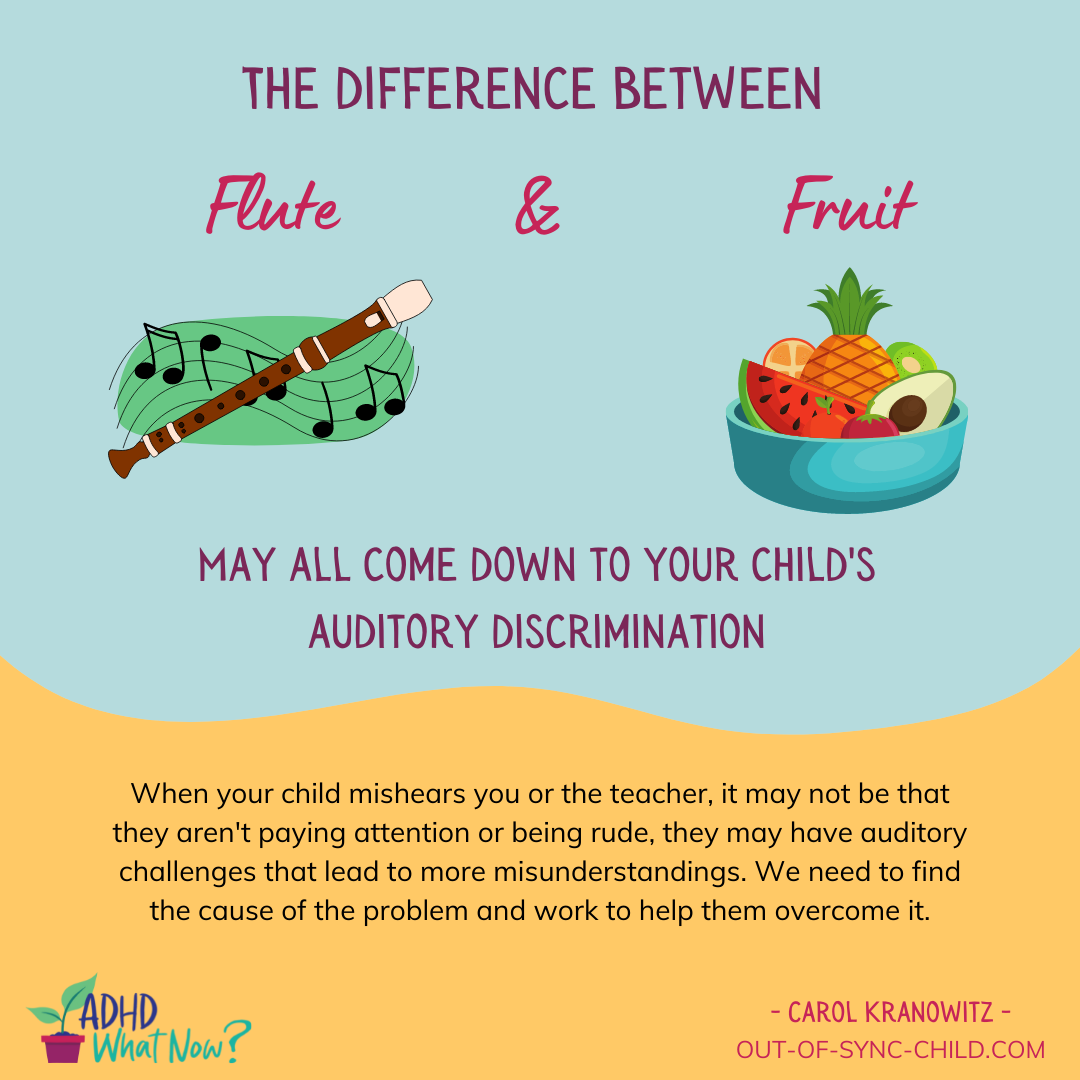 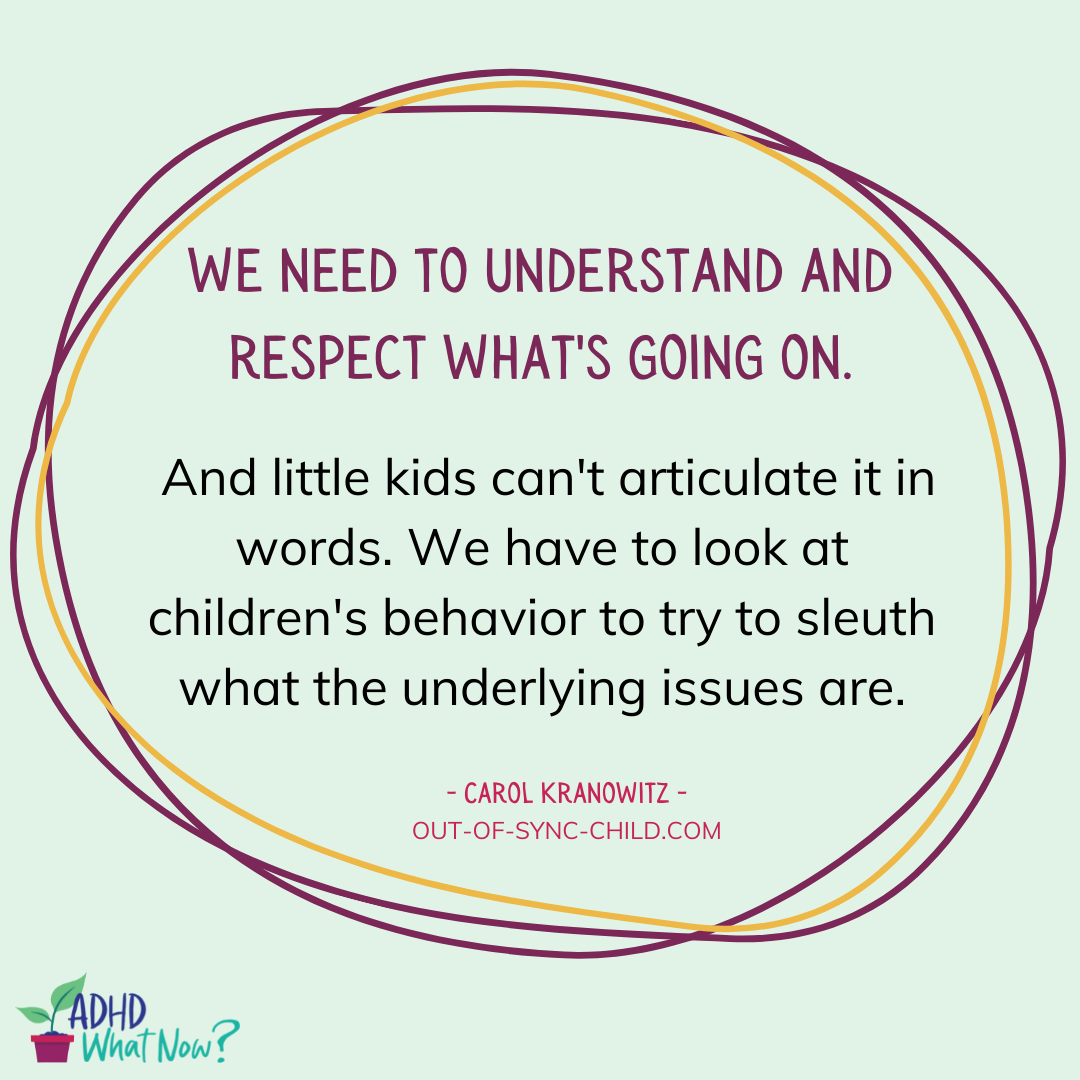 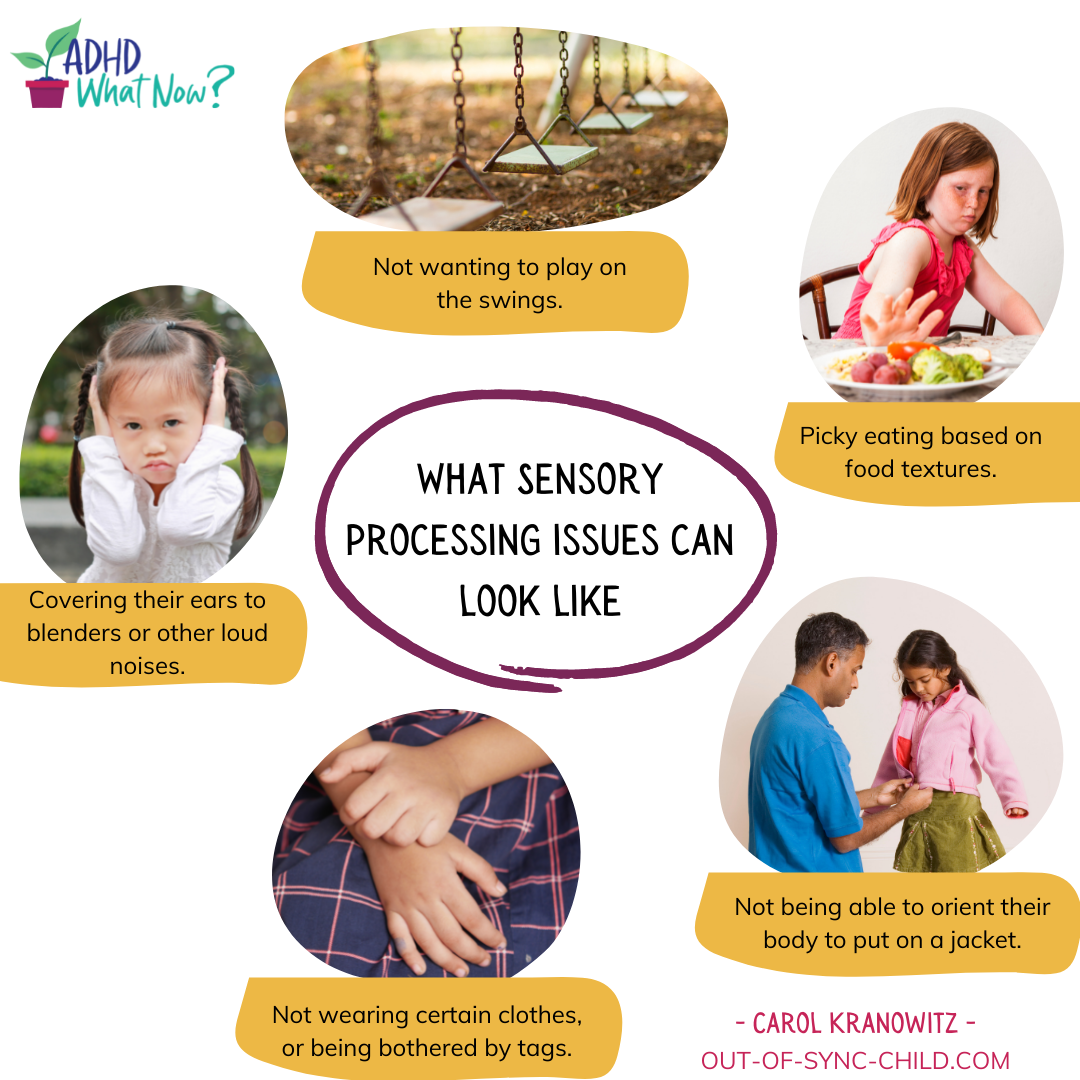 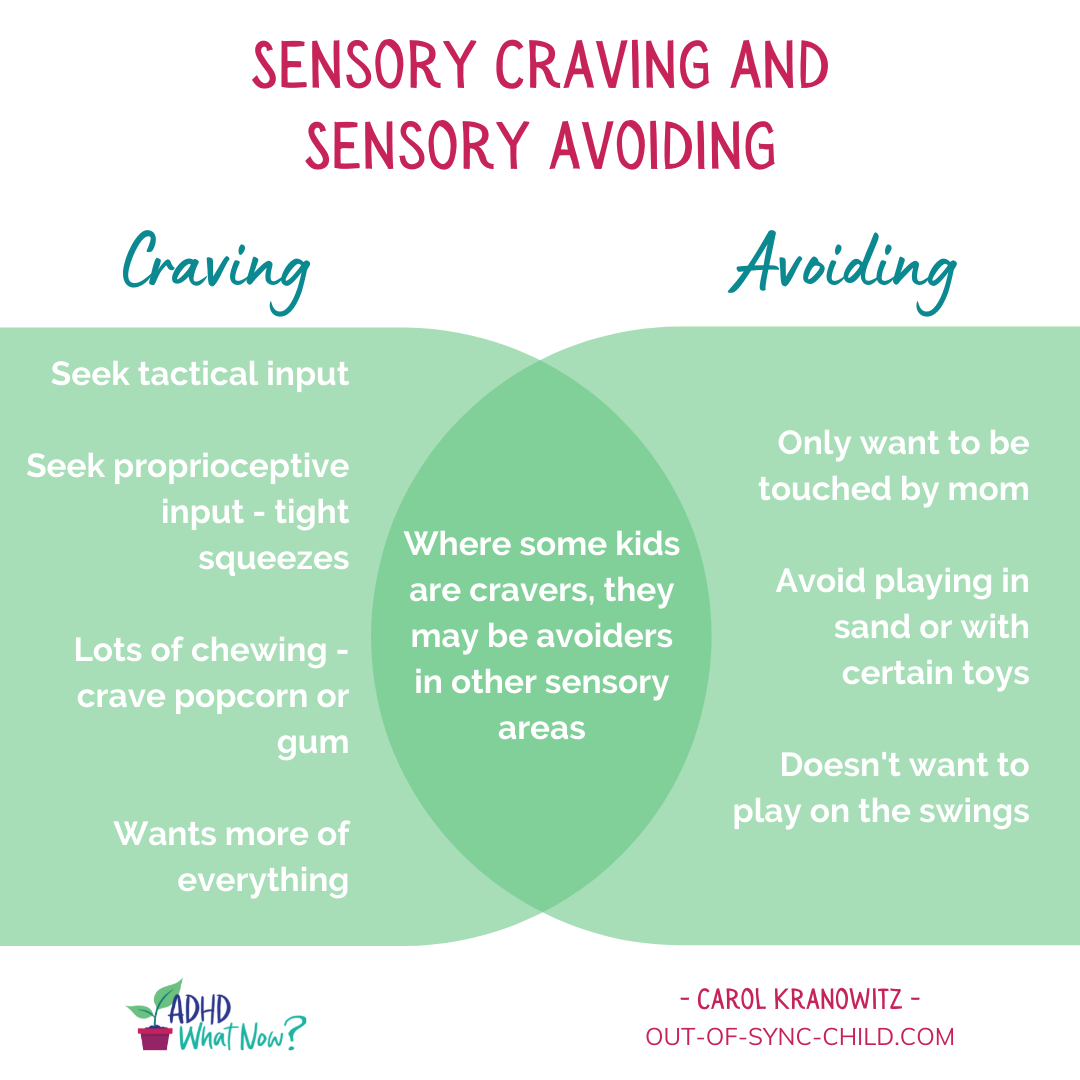 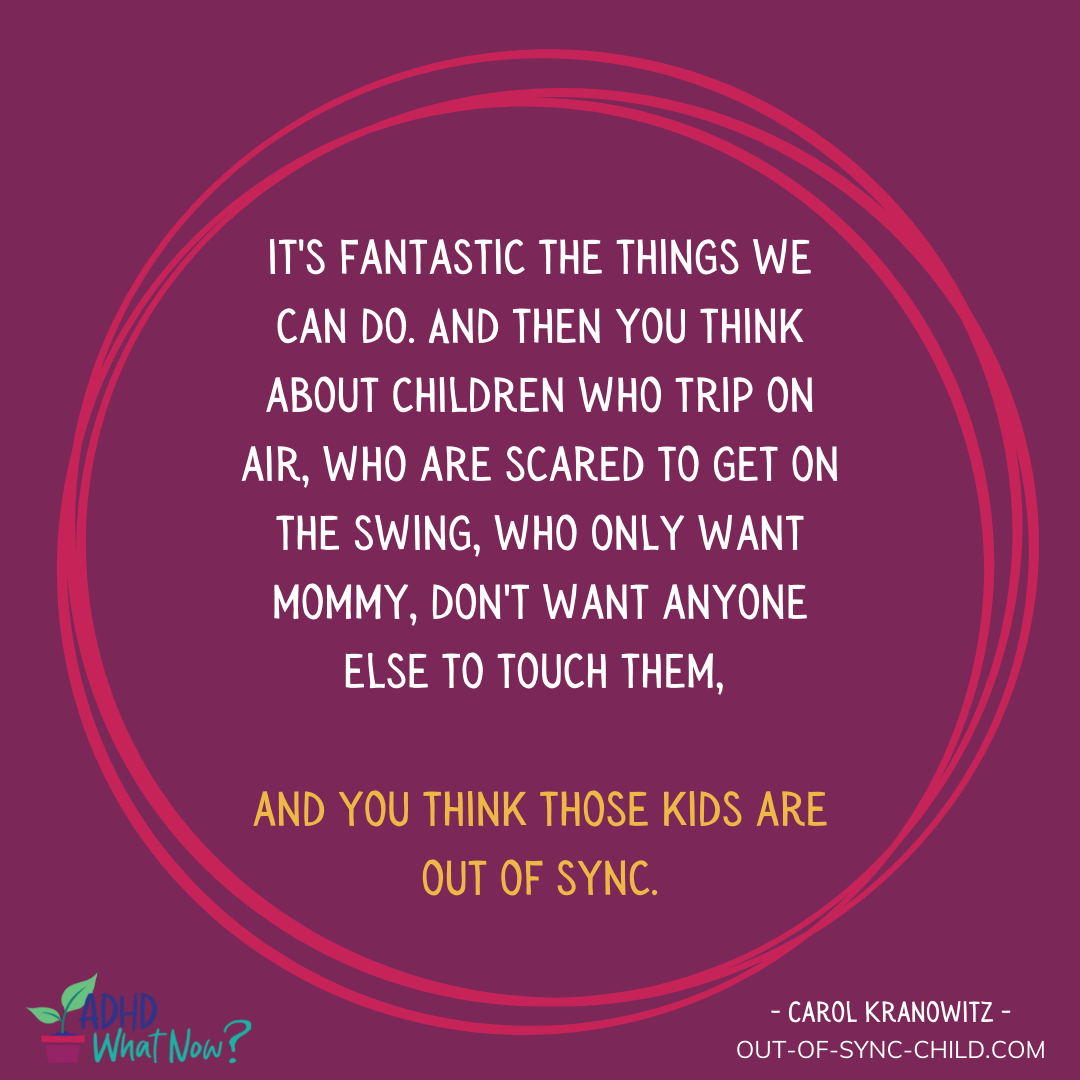 Veronica: Hi there. Have you ever wondered "why does my child lean into me so much" or "are they really afraid of the playground" or maybe they just love to spin on something constantly? And you're not really sure if this is important or not. Maybe it's the tags or the clothes or other things that can create functional challenges in life and make it just challenging to get to school on time because you're searching for that perfect shirt to wear.

So today, we are going to talk about sensory processing. My name is Veronica Hunter. I am the founder of ADHD - What Now?, mom to multiple kids for whom I've had to go on this journey of figuring out what's important when your kiddo has ADHD.

And so welcome here today, Carol Kranowitz who is the author of The Out-of-Sync Child, and she is a real expert in the area of sensory processing. Carol, thank you for being here. And do you want to share a little bit about your background in terms of sensory processing?

Carol: Yes, being in this role as a speaker about sensory processing disorder is a real serendipity because I kind of fell into it.

I was a playground and music teacher at a nursery school in Washington, DC many, many years ago, and was curious about the kids who were not enjoying the sandbox and the swings, and clapped their hands over their ears when I would strum the guitar and would take the musical instruments out of the basket and go blablabla through them instead of considering them and selecting one.

And I just wondered what was going on with these kids. They were so out of sync with the other children, and it took me about a decade of teaching and asking questions. And finally, an occupational therapist came to our nursery school and said, let me give a workshop to you teachers about sensory processing, which was called sensory integration. And it still is called that, but I prefer sensory processing. So, I was just blown away because he explained everything to me. It just made me see patterns that I felt were elusive, but they were there when I was able to see that the child who complained about the tag in his t-shirt was a very picky snack eater. He would only eat crispy things, nothing like applesauce, just pretzels. And wouldn't sit close to other children at circle time.

All of these seemed isolated behaviors. And when I understood those all are indications of a tactile over-responsivity. That kind of information clarified so much to me. I got so interested and I wanted to read everything I could. There wasn't anything to read for people like you, Veronica and me, you know, a parent, a teacher. So I wrote it.

Veronica: It's an excellent, excellent book.

Carol: Thank you. Thank you. It's The Out-of-Sync Child. Yes. About to go into its third edition, which will come out in a few months, but it's available now, get it now and get most of it. There are just a few updates coming along in a few months.

Veronica: Awesome. I'm so excited. So Carol, what are the different senses to be aware of?

Carol: Okay. All right. So, we have five senses that most people know about; seeing, hearing, smelling, tasting, and touching. And it's interesting that we have receptors for all five of those up here in our head. Touch is also all over the rest of our body.

So, we have touch, you know, we'll blink if something comes near our eyes because our tactical system says, "Oh, hair is going to go in your eye". We have tactile receptors in our hands, in our feet, in our skin everywhere to tell us if a touch is benign or hostile.

To balance, we need vestibular, proprioceptive, and visual input zooming into our central nervous system and saying, this is where you are in relation to objects around you. This is how you are moving or not moving.

And wow. When you think of the brilliance of this design, it's fantastic that we can do the things we can do. And then you think about children you know, who trip on air, who are scared to get on the swing, who only want mommy, don't want anyone else to touch him. You know, you think of kids who are out of sync. And if we can look at kids' behavior and think "Geez, is it possible this child has an auditory problem. That's why he put his hands on his ears?"

Well, that's an obvious one. Is it possible? This child is having a problem with his vision. That's why he's got one eye closed, and his head tilted. That's kind of obvious.

It's not obvious though, to see a child who can't orient his body to get into his winter jacket. We don't think that that's a sensory problem.

Veronica: And what are the different sensory challenges that people might experience?

Carol: Where there are sensory avoiders, there are sensory cravers. The craver might like that tactile input. And that's also proprioceptive input, when you're squeezing somebody around the knees. There's the popcorn craver. There's a person who wants to eat because I was referring to that too. Cause you know, the jaw working is organizing. That's why you want to give kids chewing gum, the bigger the wad, the better. So they won't chew their t-shirt cuffs or collars. The craver just wants more and more of everything. More action, more noise. If there's not enough sound in the room, the kid will make noise. This is the child who is the like Evel Knievel, you know, Evel Knievel, the guy who writes his motorcycle over the Grand Canyon or something. Looking for excitement all the time; bungee jumpers.

So that child can be craving in one area like movement, and he can be avoiding other sensations. Then there are kids who don't avoid and don't crave and they do notice sensations. Those are modulation problems. They modulate, they regulate how important sensations are in a mature way. But these are kids whose sensory problem might be with discrimination.

Here's an example. This is a little kid, and I'm sorry my examples are almost always preschoolers, but I hope you can generalize this to older kids. One day I brought my recorder to the music class, and a recorder, you know, is like a little wooden thing you go toot, toot, toot, and I played a little tune. I held the recorder up and I said, "some people call this a song flute". And this little boy said, "oh Mrs. Kranowitz, I had Fruit Loops for breakfast". So first I thought, "there he goes again. He's so out of sync, why is he bringing up what he had for breakfast?"

My second thought was, "oh, he heard me say flute, but he didn't discriminate with it well. He heard fruit. And so then he jumped to Fruit Loops and he thought he was having a charming dialogue with me.

Think of that a million times, when a kid hears you, mishears what the teacher or the parent says, and you think the child is rude. He's not paying attention. He's got ADHD. He's not with the program. No, it's because of auditory discrimination, problems, visual discrimination problems. That can be the child who needs to copy an assignment down from the board. And he reverses letters. So he writes 'B' instead of 'D' or he writes six instead of nine and he gets the assignment wrong.

And that can happen a lot with reading too, that children are reading and they're misreading the words. It's not dyslexia. It's different. It's different from that. So we need to understand and respect what's going on. And little kids can't articulate it in words. We have to look at children's behavior to try to sleuth out what the underlying issues are.

On the other hand, if I'm stirring them up a little bit and getting them thinking about the sensory differences, it's really interesting to see what the common issues are.

Veronica: Thank you, Carol. That is amazing. And I know that Carol is such an expert in sensory processing and being able to understand it and explain it in an easily accessible way.

So, absolutely I would recommend if you want to go more into sensory processing, checkout her webpage out-of-sync-child.com, which is also linked down below or the book Out-of-Sync Child. Also, if you are interested in more about understanding your child and picking any next steps, go to WhatNowADHD.com and I will see you there and being cheering you on.

THE ADHD- What Now NEWSLETTER

Shouldn't tuning in also result in
positive progress for your family?

You're safe with me. I'll never spam you or sell your contact info.

Enter your details below to join the challenge.